Grow your digital news startup with us

GNI, Media Lab and the EJC have built a six-month programme specifically tailored to the needs of content startups in Europe. Participants benefit from Media Lab’s experience in supporting media startups and from EJC’s extensive European network and active community: they will take part in workshops, coaching and high-profile networking opportunities. Additionally, they get access to up to € 25,000 in grants for running revenue-generating experiments, should they need it.

The GNI Startups Lab Europe aims to help journalistic startups better understand their audiences, create higher quality content (text, audio and/or video) and navigate the pitfalls of monetisation. At the end of the programme, you will have improved your capabilities to sustainably provide your audience with high quality journalism.

Journalism first: A programme designed for those who bring great stories, breakthrough reporting and valuable services to their communities

In partnership with the  GNI, we make sure all participants have access to a budget to fund revenue-generating experiments

Available to early stage news organisations all over Europe

The programme consists of three phases:

The Product Development Phase starts in November and continues until the end of December. Participants learn how to develop your customer base further, how to refine your content strategy and how to utilise some basic innovation methods.

The Growth & Marketing Phase in January and February 2022 will support participants in matters such as Visibility, Ad Sales and Leadership.

The final Business & Sustainability Phase in March and April 2022 will help participants grow your startup to the next level by working with you on topics such as Recruiting, Finance and Investment.

All phases are held fully remote and mostly as live video calls. They will be separated by Pitch Days, giving the teams the opportunity to demonstrate their progress to a group of media industry experts. The programme will end with a celebratory Demo Day. 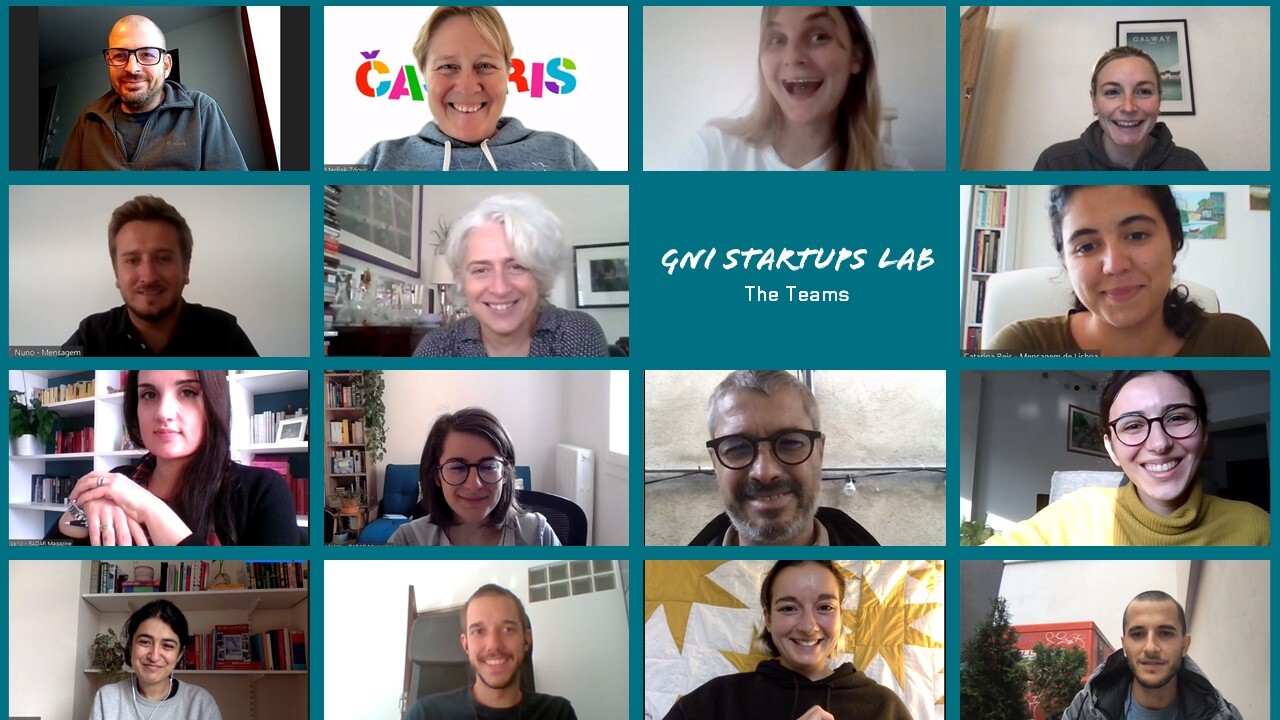 All of the participating teams (in their own words):

Átlátszó Erdély (meaning Transparent Transylvania) is the only independent, nonprofit newsroom in Romania doing investigative journalism in the public interest focusing on the 1,2 million Hungarians living in Transylvania, Romania. Átlátszó Erdély works to make public expenditures more transparent, expose abuse of power and betrayal of the public trust by public officials and institutions and use investigative journalism to reform institutions.

Baynana is a digital magazine founded by refugees for migrants and refugees. It is the first magazine written in Arabic and Spanish about migration that is committed to social and public service journalism. The magazine aims to offer useful information to the Arabic-speaking community in Spain and, at the same time, to build bridges between migrants, refugees and Spaniards.

Časoris is an award-winning online newspaper for children. Our vision is to inform, guide and inspire children by publishing news they can trust. We offer timely, relevant articles on current affairs, sports, science and entertainment in a kids-friendly language, accompanied by questions for reflection and a glossary.

Girlhood is a community and media platform powered by girls and young women around the world. To create a platform that reflects ordinary girls' stories, we're creating a pipeline and a community-powered media organization: we train girls in storytelling, edit and produce their work, and curate & publish their stories. This is the world, as seen through girls' eyes.

Média'Pi! association fights against the social exclusion of deaf and hearing impaired people in France by giving them access to information. Média'Pi is a generalist bilingual online media in French and French Sign Language. It offers articles, photo reports, comics, photos and videos on general news and on the deaf community. It is also a learning platform - a "beacon" for the deaf community.

Mensagem is a local online magazine for Portugal’s capital. Its mission is community - bringing to light what our neighbours are doing in the city, for the city. Mensagem covers local politics and social issues as well as putting real people at the center of its reporting. The editorial office is based in a café downtown called Brasileira, acting as a connection point to the city and its people.

We live in an age of environmental transition. To understand the global issues that have an impact on our lives locally, as well as possible solutions, we need journalism that explains the complexity. We do just that with RADAR, a monthly online magazine in which storytelling meets sound scientific content and award-winning photojournalism.

Recorder is an independent online publication, founded in 2017 by four journalists who wanted to create a public service media platform guided by honesty. Today, it is Romania’s most important independent video journalism platform. "Journalism made for our readers, not for obscure interests" is our tagline. We believe that the future of journalism lies in images, but we also publish reports and video investigations.

shado mag CIC is a multimedia platform operating at the intersection of arts, activism and academia. We bring together voices from diverse fields, which are currently working in silos, to encourage collaboration and to create greater impact. shado exists as a site for self-representation: we believe those with lived experience of an issue or injustice are best placed to advocate for meaningful change within that space.

SideStreet is a content creation initiative delivering news directly affecting our online community. Our promise and ultimate goal is to create an open space where people can express their views, share their ideas and make their voices heard. Keeping this in mind, our main focus is innovating the way news is delivered, making it accessible and consumable to younger audiences. SideStreet is among the first media companies in Malta to be born totally out of social media.

Programme launch for all Participants

End of Phase I

Please note: all dates are subject to change

As the application process is closed for 2021: Will there be future opportunities to work with GNI Startups Lab Europe?

We can’t guarantee that yet, since this is a pilot.  Each of the partners organising GNI Startups Lab Europe are experienced players in the support of startups, and each is committed to offering more iterations of the GNI Startups Lab or similar programmes, should the opportunity arise.

How much does the programme cost?

The Google News Initiative will cover all programme costs, meaning the Lab is completely free of charge for all participants. We do not charge a fee or take any equity. All you need to contribute is your time and energy.

Who’s the programme for?

We are especially interested in entrepreneurs who want to serve communities that don’t often see themselves or their stories reflected in their local news.

Which startups were eligible?

Where is the programme held?

What is the format of the programme?

The programme will consist of remote group events like the Startup School in the beginning and Pitch Days after Phases 1 and 2. In the meantime, startups will be able to choose from a variety of remote workshops and spend time in individual sessions with our coaches and trainers.

Which language does the programme use?

All workshops and 1:1 coaching sessions are held in English.

I have more questions! Who can I talk to?

For all questions regarding the programme, please contact Media Lab Programme Manager Lena at lena@media-lab.de.

GNI Startups Lab is a collaboration

Media Lab Bayern is an Innovation Hub and Startup Accelerator for Media Startups, based in Munich, Germany. Founded in 2015, it has provided an extensive programme with funding and coaching to more than 200 startups and teams to date. Media Lab also organizes events and offers services to established media companies to help build the future of media.

Since 1992, the European Journalism Centre has been building a sustainable, ethical and innovative future for journalism through grants, events, training and media development. They are an international non-profit, headquartered in The Netherlands, that connects journalists with new ideas, skills and people.